Bees have a hand – or shall we say a wing – in America’s food production. From pollinating our crops to offering heaping helpings of honey, bees are so much more than a summertime nuisance. But how much do you know about these buzzing bugs? For instance, did you know that…

Queen bees lay eggs every day. A queen can actually control the number of eggs she releases according to the strength of her colony. In cool weather, a queen may only lay a few hundred eggs each day. When circumstances are in the bees’ favor, she can release more than 1,500 eggs in a 24 hour period.

Honeybees can fly at a speed of 15 mph. Honeybees can fly as fast as many adult humans can run. Traveling at speeds of up to 15 mph, bees typically travel no more than three miles from their hive. They achieved this speed with wings that stroke approximately 11,400 times each minute. According to the Utah County Beekeepers Association, this lightning-fast movement is what produces the distinctive buzzing sound associated with bees of all varieties.

Bees are hot natured. Bees regulate the temperature of their central brood nest to remain a constant 92- to 93°F. Regardless of outside temperature or population – these nest may contain up to 60,000 individual bees in the spring and summer – bees need the heat to encourage the healthy growth of larvae.

There are only four species of bees that make honey. Out of the 20,000 known species, only four make honey. Of these bees, each producer can only generate 1/12 of a teaspoon in their life span, which last about six weeks; queens can live for an astounding five years. A large hive can produce more than 100 pounds of honey every year – each pound requires approximately 768 bees to visit more than 2 million different flowers and fly for a collective 55,000 miles.

Bees significantly contribute to the economy of the United States. The Bee Spotter program at the University of Illinois estimates that 30% of food consumed by humans is pollinated by bees. Bees are responsible for 100% of all almond crops, which is valued at $2.2 billion annually. Blueberries and apples, with a combined economic impacts of more than $2.5 billion, are 90% pollinated by bees. The United States exports more than $7 million in honey each year.

Humans can encourage bee population increases. Bees, despite their reputation, are fairly benign insects that only sting when provoked. And, it is in the best interest of local vegetation to have a healthy bee population. Humans can attract bees by planting plenty of brightly-colored flowers and providing protected habitats for wild bees. It is a common misconception that bees are only attracted to acres of lush greenery. Homeowners in drought-prone areas have plenty of xeriscape landscape options to make a hospitable habitat. Xeriscape, as defined by HomeAdvisor, is landscaping designed for drought-susceptible and water conservation areas. Rock Soapwort is one example of a beautiful and vigorous grower that survives with minimal water and constantly draws the attention of bees and other pollinators.

Bees produce more than honey. Winnie the Pooh may have made bees famous for their honeypot filling capabilities, but that isn’t the only food bees make. Female bees produce a secretion known as royal jelly. Royal jelly is the sole source of nutrients for the queen, who can grow up to three times larger than an average bee. It is rich in nutrients including protein and amino acids. Royal jelly is taken as a supplement by humans and, as backed up by evidence found in the Nutrition Journal of Biomed Central, may improve the mental and physical health of humans. It is also believed that royal jelly may help with reproductive issues. 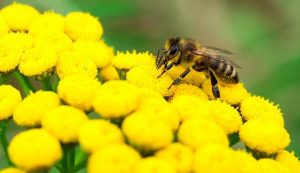